Nonstop from BER to Dubai: Fly with FTI and SmartLynx Airlines to the United Arab Emirates

Jet off to the city of superlatives: Starting now, you can fly nonstop to Dubai from BER. Initially, the United Arab Emirates route will be flown twice a week by Latvian airline SmartLynx Airlines as part of a joint venture with package tour operator FTI. The airline will fly to the Persian gulf every Monday and Thursday. A third weekly connection will be added for Saturdays, starting on December 18, 2021, just in time for Christmas. Now, for the first time since March 2020, the capital region is once again connected nonstop with the United Arab Emirates. The new connection is another step towards a return to normal air traffic.

Aletta von Massenbach, Chief Executive Officer of Flughafen Berlin Brandenburg GmbH: “We are pleased that SmartLynx Airlines and FTI are connecting BER with Dubai. The tour operator offers travellers in the capital region the opportunity to travel nonstop to Dubai. The new route is another step toward returning to normality in air travel.”

The route to the heart of the Middle East will be flown by an Airbus A321. Flights from BER take off late in the evening with a flight time of around 6.5 hours. That means travellers can start their first full day of vacation as soon as they arrive. Departures leave BER at 10 p.m. and arrive at Dubai International Airport (DXB) early in morning at 6.15 a.m. local time. Return flights leave at 8:00 a.m. on Tuesdays and Fridays from Dubai Airport and arrive at BER at 12:45 p.m.

Flights can be booked on the popular online travel websites and platforms and can also be booked individually via the FTI –Touristik website.

Dubai und EXPO 2020 The new route begins right on time for EXPO 2020, which had to be postponed for a year due to the pandemic and will provide exciting insights into the issues of sustainability and mobility over the next six months under the motto “Connecting Minds, Creating the Future”. The EXPO site is also well connected to the airport.

SmartLynx Airlines The holiday airline SmartLynx Airlines is one of the leading charter and ACMI providers in Europe. Founded in 1992 as LatCharter, the Latvian airline has been operating under its current name since 2008 and has a fleet of 15 Airbus A320s, seven Airbus A321s and five Airbus A330s. 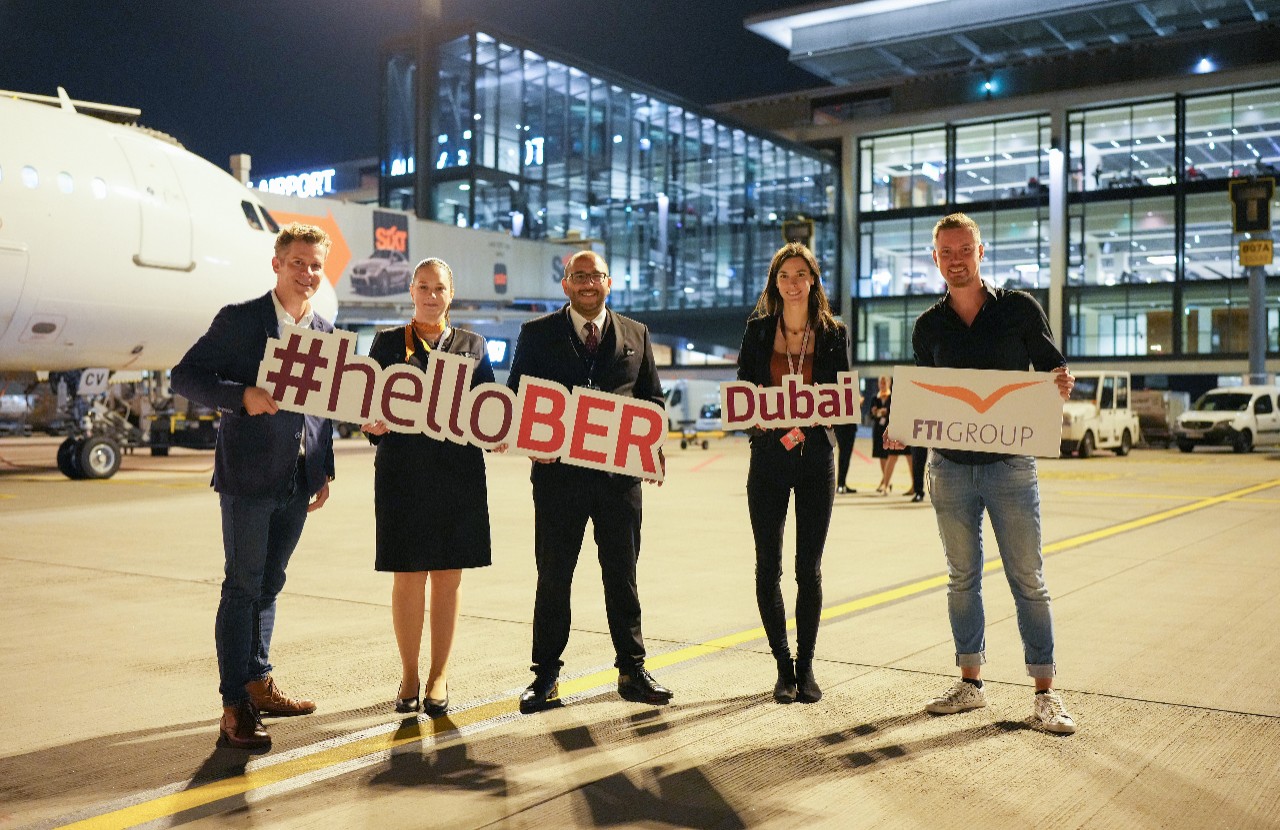 The responsible colleagues of FTI Touristik, SmartLynx Airlines and the airport company Berlin Brandenburg for the first non-stop flight from BER to Dubai on October 4, 2021.