Dietz Airport Hotels Grundbesitz GmbH and Flughafen Berlin Brandenburg GmbH yesterday celebrated the completion of the shell for the IntercityHotel at BER with a topping-out ceremony. Completion and commissioning of the hotel are planned for the beginning of 2023.

Dr. Wolfgang Dietz, CEO of Dietz AG: “In today's world, a modern airport is an elementary component of the infrastructure and a catalyst for economic prosperity in a region. We are pleased to be able to make a further contribution to the development and strengthening of BER, the city of Berlin and the entire region through this project. BER will soon have a contemporary, modern hotel at its disposal in a central location near Terminal 1, which, together with the existing hotel, will be the heart of hospitality at BER for the coming decades.”

Aletta von Massenbach, CEO of Flughafen Berlin Brandenburg GmbH: “Dietz Airport Hotels Grundbesitz GmbH, which previously constructed BER’s Air Cargo Center, is a proven and important partner. For us as an airport, the construction of a second hotel in the direct vicinity of Terminal 1 is an important step in the development of the area around Willy-Brandt-Platz. During good weather, the site is already well received by passengers, employees and day trippers from the surrounding area. The new hotel will liven up the square and make it even more inviting. This represents a new piece of BER’s urban landscape that fits in perfectly with its surroundings.”

Christian Hentschel, Mayor of Schönefeld: “The hotel represents an important milestone and will act as impetus for the development of the airport environment and at the same time for the entire community. But it is also another visible sign of the rapid and dynamic development that Schönefeld has been experiencing for months. Offices, catering facilities, infrastructure – a mini-city, so to speak – and many new jobs will be created here. A development that has an impact on many other areas and from which, not least, Schönefeld’s districts will also benefit. A new hotel, especially in such an important location, also means a further increase in the number of overnight stays. But this is not just a place to stay. The hotel is also a meeting and educational venue, as well as a starting point for activity and discovery. For the community of Schönefeld this is a welcome opportunity to present itself to the guests as an attractive place to live and work and, at the same time, to develop its tourism potential in the future.”

Christian Kaschner, CEO of IntercityHotel GmbH: “We look forward to welcoming travellers from all over the world at BER in the IntercityHotel Berlin Airport from 2023 onwards. The IntercityHotel brand stands for mobility, design, comfort and service. Our hotels are characterised by excellent accessibility and short distances. Together with the Steigenberger Airport Hotel Berlin, two traditional brands of German hospitality will offer a wide range of options for travellers just a stone’s throw from Terminal 1.” 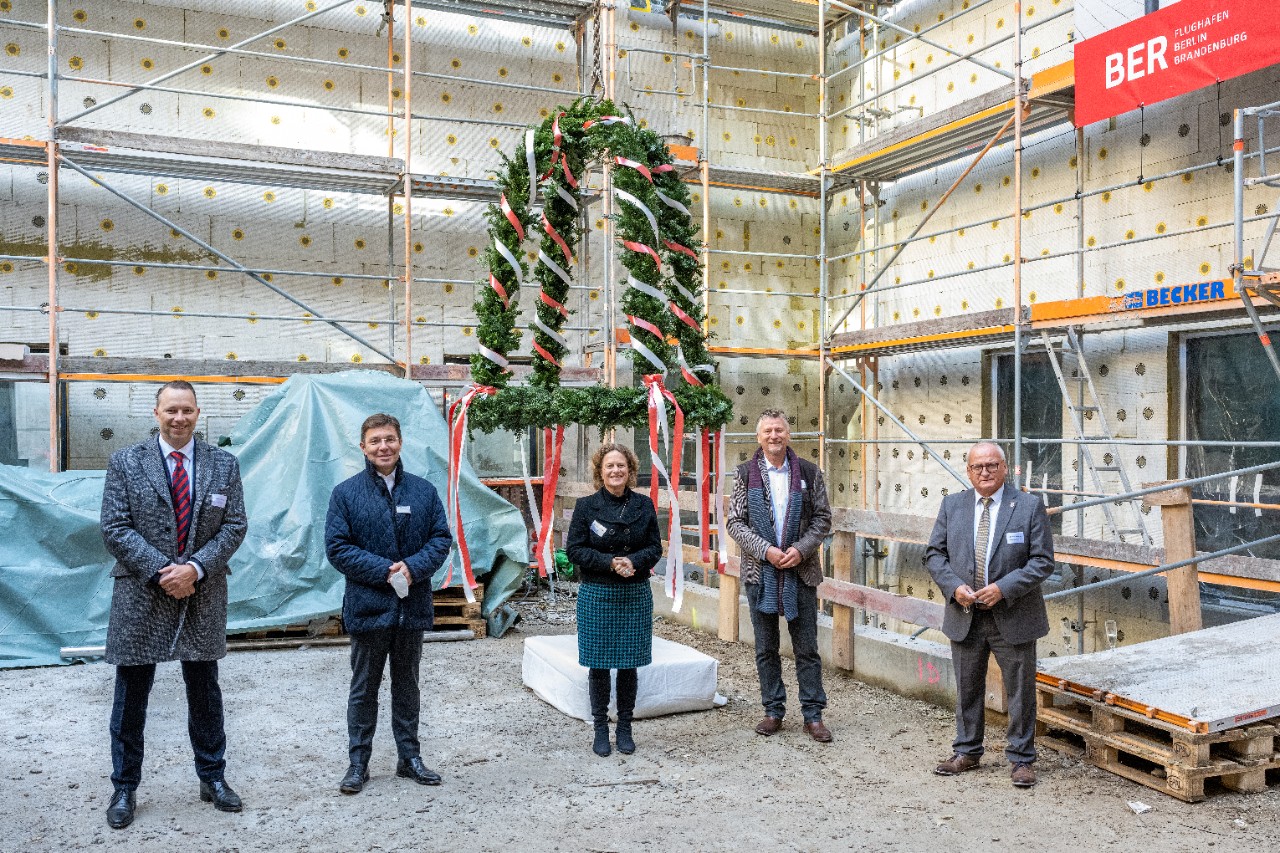 Dietz Airport Hotels Grundbesitz GmbH and Flughafen Berlin Brandenburg GmbH celebrated the completion of the shell for the IntercityHotel at BER yesterday with a traditional topping-out ceremony.

Right in front of BER’s Terminal 1, located at Willy-Brandt-Platz, a six-story hotel in the upper-middle-class bracket is being built with 357 rooms, a large spa area, 450 square metres of conference space and a restaurant with a bistro lounge. The new IntercityHotel with a gross floor area of around 14,000 square metres is the second hotel to be built right next to Terminal 1 after the Steigenberger Hotel, and complements the existing range of hotels at BER. At the same time, the hotel marks the beginning of further land-based real estate development, which will continue with the Midfield Gardens district to the east.